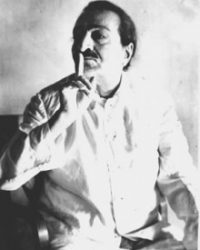 “When my silence is broken and I utter the Word, infinite wisdom will be released”

On a previous occasion a month before (on 4 April), Baba had commented about Jesus to the mandali:

Jesus sometimes used to tell his disciples things which they could not understand at all. But despite all that, they stuck to him wholeheartedly and followed him till the very end, because they understood this much, that the working of the God-Man was a subject far beyond human understanding.

It is the same with me. Sometimes, I say things which you are at a total loss to understand. This is the last cycle of cycles, so I observe silence that it may bear fruit. I will speak only one Word. Innumerable such cycles have gone by, and innumerable are the times I have descended. It is not for the first time that I am observing silence. Such observance, and the subsequent breaking of the silence, is an occurrence in eternity from time to time.

When an atom is split, a great amount of energy is released. Similarly, when my silence is broken and I utter the Word, infinite wisdom will be released. When an atom bomb strikes the earth, great upheaval takes place in the form of vast devastation.

Similarly, when that Word will strike the universe, great upheaval will occur in the form of material destruction; but, above all, there will also occur a tremendous spiritual upliftment.