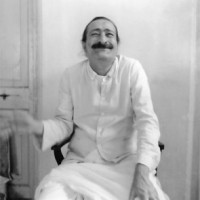 From 9:00 A.M. to 10:30 A.M. Baba sat on a rock in front of the rishis’ cave overlooking the lush valley and water below. Two blankets were hung on either side to prevent the breeze from blowing on him. Kaka kept watch on a higher rock. Baba then came down and sat on the verandah of his hut until noon. He had vegetable soup prepared by Kaka, who had been relieved from watch at eleven that morning by Pendu until it was Gustadji’s turn.

When Baba came to the companions on 9 November, in the morning, Dr. Ghani was in the toilet. Baba sent for him, and he came as he was — unwashed and with his pants down! Baba and the others applauded him, loudly clapping their hands at his instantaneous obedience. Baba appeared very pleased. Ghani was then sent back.

Bhaskara Raju of Andhra had prepared several charts on God Speaks and presented them to Baba at Guruprasad. Baba liked them and stated, “You yourself have done all these charts on your own accord, but now I say prepare a chart on Baba Is The God Of All Gods.” Raju did so and Baba received it on 9 November, and was pleased with his efforts.