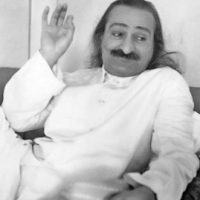 Despite it being the height of summer, Baba complained of fever and pneumonia on 8 May 1925. His brother Jamshed came to see him from Poona, but when Jamshed began arguing with him, Baba picked up a cane and struck him with it. Rustom and Gustadji also got into an argument, which prompted Baba to send all away from Meherabad. Things were back to normal by the following day, and a film titled Bhasmasur Mohini was shown.

During darshan the next day, Sunday, 8 May, a visitor requested that Baba give him his blessings. Baba replied:It is very easy for me to give blessings, because you are eager to receive them. The necessary receptivity is already there. But it is not so with love, because no one really wants to receive it as it should be received. The warmth of love is so unbearable that one who receives it has his whole being “blistered” and “blasted!”