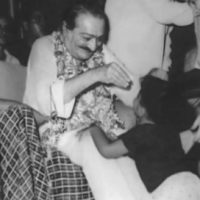 Baba’s crypt-cabin was being rebuilt in stone at this time, and at 3:00 P.M. on Wednesday, 6 March 1929, the opening ceremony of the new pucca (permanent) room was performed. A tea party was held in celebration on the platform outside the Tomb with gramophone records being played and sweets distributed, brought by Adi from Ahmednagar.

The public darshan was held on Sunday, 6 March 1960, in Khushru Quarters from early that morning until 2:00 P.M., and nearly 8,500 persons availed themselves of his darshan. The Ahmednagar bhajan group sang as Baba sat on a dais under the shamiana and handed out prasad to the many people who had come from distant places such as Bombay, Poona, Hamirpur, Nasik, Surat, Pathardi and Calcutta.

Nari Contractor, the famous Indian cricket player, and the Maharani of Baroda were also present. Baba had also brought the women mandali from Meherazad, who watched the proceedings from behind a screened-off area. Lunch was prepared for them and Baba, but Baba had not time to eat and took the food with him to Meherazad.