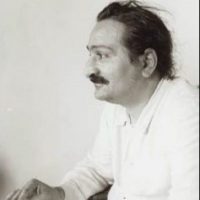 Quite a concourse of lovers was present in Guruprasad on the morning of Sunday, 5 May 1963, including Amar Singh Saigal, who had contacted Jawaharlal Nehru as directed by Baba.

Espandiar  arrived at Guruprasad on 5 May 1963 and was extremely anxious to meet his Master after more than 30 years of separation, but Baba did not grant him darshan at once. On the contrary, he sent word for him to sit outside and read verses from the Divan-e-Hafiz. Espandiar sat on the verandah reading the book. After about half an hour, Baba called him inside. To see him meet Baba after so many years was a touching scene. Putting his head on Baba’s feet, he wept and wept. After a few minutes, Espandiar was lifted up and he embraced Baba.

Baba gathered the Western men and women and narrated this short tale illustrating obedience: Once a Master asked his disciple to wake him at 5:00 A.M. by knocking on his door. The disciple kept vigilantly awake all night until 4:55 A.M. He then dozed for ten minutes and awoke at 5:05 A.M. Meanwhile the milkman who used to come every day at five o’clock, arrived at his usual time and knocked on the door. The Master said, “Open,” and the universe was opened to the milkman! But this was ordained, not just chance. Realization is never a matter of chance. It is such a big thing. It is all chalked out, all planned beforehand.