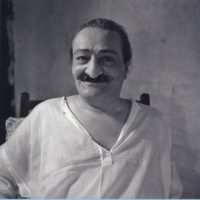 From Hardwar, on the morning of Sunday, 4 April 1948, Baba and the mandali boarded a bus bound for Rishikesh. Upon arriving there, nine Nepalese coolies were hired for the transport of their luggage through the mountainous trek to Uttar Kashi. While in Rishikesh, in a place called Brahm Ashram, Baba had a good contact with the widely respected Tapovan Swami.

Good Friday was on 4 April 1958. That morning, Baba suddenly expressed that he wanted to be driven to Udtara to visit the site of the second automobile accident. “See that you take me to the exact spot, but be careful not to cross beyond the accident spot,” he warned Kohiyar, who was driving. Eruch, Bhau, Savak and Jalbhai went with them.

Kohiyar later related: “Stopping a few feet before the spot, Baba ordered us to get out of the car. Baba then hobbled along and across the road to and fro, some three times, as if to draw an imaginary border line. He stated, ‘I do not want to step even a single step from here to the Satara side.’ Baba pointed out the field on the opposite side of the accident spot where he had played cricket with the mandali.”

On Monday, 4 April 1960, Baba had a fever and cold, and also complained of a sore throat. The swelling of his feet and a “heaviness” in the soles of his feet lasted on and off the entire month. Baba allowed Goher to give him whatever treatment was necessary, but he would not allow her to consult any outside physician, or take him for any checkup, which could have been done easily in Poona. And, in spite of the sufferings, Baba kept permitting darshan programs.