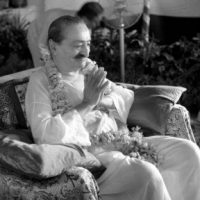 While at Harmon, on 2 December 1931 Baba assigned each person different duties and chalked out a schedule to be followed at the retreat after his departure. Margaret Mayo had been impressed by Baba. For his work, she had agreed to permit the use of her house for a year, which was to be known as Meherashram.

Baba reaches Venice, Italy on his 4th visit to the West.

Baba’s second car accident occurs in Udtara, India near Satara. With him are Eruch, Pendu, Vishnu and Dr. Nilu. Baba is badly injured in the accident and Dr. Nilu is killed.

On the morning of Saturday, 2 December 1960, 100 poor persons from Pimpalgaon Village were brought to Meherazad. Baba washed their feet, bowed to them and handed each ten rupees as prasad. He allowed Ben Hayman and Joseph Harb to help in the work. He positioned Ben on his right and Joseph on his left, during the first half of the program. Ben passed a ten-rupee note to Baba for each poor person, which Baba handed to them.

Joseph was busy giving Baba water and handing him the towels. He was keeping careful track of the number who had been washed and was amazed when, at exactly 50 (half), Baba reversed his and Ben’s positions. At the end of the program, Baba went to his room to rest, as his head ached from all the bending down.

Adi returned to Ahmednagar and on 2 December 1961 gave a detailed account to Baba of the proceedings. A week after returning from Hamirpur, Adi and Jalbhai were sent to Andhra to inaugurate Mehersthan, a new center built by Koduri Krishna Rao in Kovvur. There a life-size statue of Baba in bronze was to be installed.