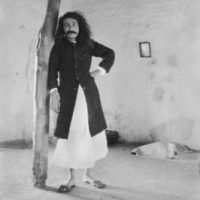 Since the day Baba had started his one-meal fast, he had been serving food to the mandali himself. On Friday, 29 December, when he was serving Ghani’s plate, Ghani said, “I don’t have much of an appetite today; I don’t wish to eat.” Baba became upset by this remark and angrily told him, “You have just broken one of the 28 orders.”

Ghani replied, “According to my understanding, I have not broken any.” While scolding Ghani, Baba suddenly threw the plate he was holding at Behramji. The atmosphere was tense as Behramji cleaned up the mess, but within a short time the argument stopped and Baba became calm.

Baba left Meherabad early in the morning on Monday, 29 December 1941 and went to the train station, accompanied by Baidul, Eruch, Chhagan, Gustadji, Kaka, Pendu and Savak. At the station they were informed that the tracks were blocked by special army troop trains and it was not known when the Allahabad train would arrive. To avoid a long delay, Baba decided to travel to the railway junction of Manmad in a private bus provided by Sarosh.

On the way, they passed by Shirdi and Sakori, and Baba pointed out Dahigaon, where the last meeting between himself and Upasni Maharaj had taken place. The men wondered to themselves whether it was really an “unforeseen” turn of events that had made Baba change his plans at the last moment and travel to Manmad by bus. Or, whether it had deeper significance: Namely, that Baba was going to do his important work after having first passed through the spiritual atmosphere of the ashrams of two of his Masters.

Baba invokes the help of God for his work of Manonash, and those who wish to join him in this invocation may do so by wholeheartedly and lovingly repeating any one of the following names of God for half an hour each day, from December 29, 1951 to February 16, 1952:

Parsis to repeat: Ahuramazda; Iranis to repeat: Yezdan; Muslims to repeat: Allah hu; Hindus to repeat: Parabrahma; Christians to repeat: God the Father, God the Son and God the Holy Ghost. All others may repeat the name of God commonly used in their religion.