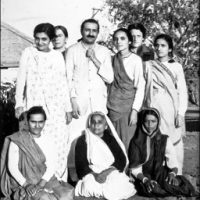 Early in the morning of Tuesday, 28 March 1950, Baba left for Hardwar with his four companions. There he contacted 612 sadhus and mahatmas of the Nathpanthia and Nirmali sects.  Near the center of the Nirmali camp, one of the elder mahatmas was lecturing the crowd on “the benefits derived by taking the darshan of saints and sadhus.” Standing there, as if giving his full attention, Baba listened to the mahatma’s sermon on spirituality for a full hour. Afterward, Baba contacted 70 female sadhus of the sect called Matajis (Mothers), and bowed his head at each woman’s feet. With these women, this brought the total number of contacts to 4,510.

In Mahabaleshwar, Baba would mostly sit in a chair on the verandah of Shapoor Hall, admiring the view and relaxing with the mandali and visitors. Since Nariman had sent his car for Baba’s use, occasionally Baba would go out with either the men or women for a drive. On 28 March 1958, Baba was driven with the mandali to Pratapgarh, the hill and fort of Shivaji, which could be seen from their house.