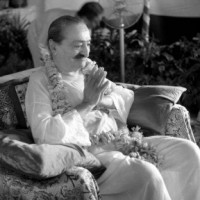 On Thursday, 28 January 1926, Hazrat Babajan’s birthday was celebrated. Plans were already being made to celebrate Baba’s birthday in a few weeks.

Baba washes the feet and bows down to 56 of his followers. He explains that he is bowing down to the 56 God-realized ones through his followers.

On Wednesday evening, 28 January 1953, Baba and the mandali boarded the Madras-to-Poona passenger train headed back to Meherazad. Thousands had crammed onto the train station platform to see them off and many were weeping. The group reached Vijayawada, where about 300 persons came to see Baba before his train left for Dhond. As per Baba’s instructions, his darshan was permitted only through the window of the train. Each of those gathered clamored for a few moments in the Beloved’s presence. Many asked for Baba’s help, saying, for instance, that a daughter was still unmarried, or a family member was ill.

Since early in the morning on Tuesday, 28 January 1969, Baba began having frequent spasmodic jolts — as if an electric shock were passing through his entire body. It was a horrible day. For sixteen hours, Baba had continual major and minor “jerks” from 5:00 A.M. to 9:00 P.M., while Eruch, Bhau, Pendu, and Francis had to hold him down on the bed. The jolts completely exhausted him. With every jerk, Baba would complain of terrible pain in the small of his back, which was caused by back spasms. He even found breathing difficult. Finally, Baba’s physical body returned to normal; from 9:00 P.M. until 3:30 A.M., there were almost no jolts.