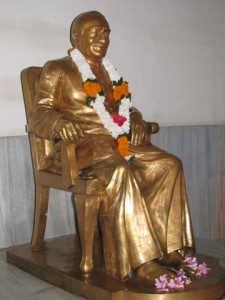 On Saturday, 28 February 1931, Baba performed the opening ceremony of Rustom’s new movie theater in Nasik. At the hands of the Master of the Universal Cinema, the Circle Cinema was officially declared open.  A Charlie Chaplin comedy, Shoulder Arms, and another film were shown.

In Andhra, on Friday, 28 February 1963 at 7:00 A.M., Maharani Shantadevi declared Mehersthan open to the public by cutting the seven-colored ribbon strung across its entrance. She unveiled the bronze statue of Baba and delivered an address. Adi then unfurled Baba’s flag on the dome of Mehersthan and gave a speech. Many attended the function, including several dignitaries and Yogi Shuddhanand Bharati, Dr. Moorty from Calcutta, and Hoshang Bharucha from Navsari, all of whom gave a short speech.

At Meherazad on the 28th, Baba called both the men and women mandali to the hall to stand before him. At 7:32 A.M., exactly at the moment Shantadevi was unveiling the statue at Mehersthan, Baba clapped and, according to his wish, all the mandali shouted with one voice, “Parvardigar!”