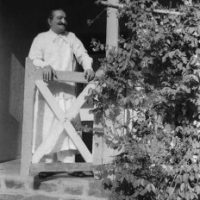 On 27 March, Baba contacted a mast called Ganpat in Abu Road. He stayed under a tree outside the town. Baba took him to a nearby well, bathed him, clothed him in a new lungi and gave him his own silk coat and some rupees. Pleased with these contacts, Baba returned to Mount Abu.

Coming from Mahabaleshwar Baba stays for the first time in Guruprasad, Poona (Pune), the summer palace of the Maharani of Baroda. After 1957, Baba and the mandali generally stay in Guruprasad for the summer months each year up until 1968.