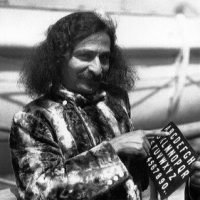 On 20 March, Ghani Baba was persuaded by his brother to meet Meher Baba. Ghani Baba had protested coming, but when he was taken upstairs he was overcome and became very reverent, bowing to Baba, who gave him prasad.

After he had gone, Baba explained, “Those saliks like him who are advanced, particularly those with powers, cannot approach me. I am too powerful for them. Their powers would be withdrawn; therefore, they usually do not come to me. Ghani Baba is good. He knows me a little. He is in the line [on the Path] and more advanced than Mastan.”

Although Baba was not meeting outsiders, before going to the West he agreed to be interviewed. A 25-minute interview was given to James A. Mills, an American correspondent for the Associated Press, on Sunday, 20 March 1932, at 10:00 A.M.  Mills’ article was carried in most major newspapers in America under the headline, Indian Seer Starts for American Tour.