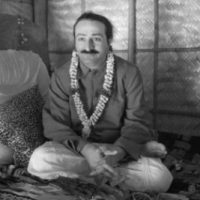 Ali Shah was sent back to Ahmednagar, and Baba began a ten-day fast on water mixed with Glucose D for seven days, and water and orange juice on the final two days. As they had so many times before, the mandali realized the significance of Baba’s work with Ali Shah and his fast, when they heard on the radio on May 1st that Adolf Hitler had committed suicide the day before, knowing Berlin was about to be captured by the Allies.

Baba arrives at the Poona Center for the first day of the 1965 Darshan.