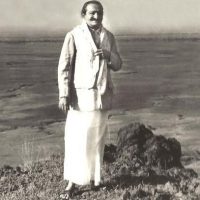 Eleven bullock carts came on Friday, to transport items from Meherabad, Meher Ashram. Baba came down the hill four or five times that day and personally supervised the loading of the carts.

Baba  dictated a complete scenario, from which he wished a film to be produced. The film was to be called How It All Happened. It was to show evolution from the beginning to the human state.

Baba entered seclusion in the mast ashram on the hill at noon on Saturday. Eruch had been the manager of the mast ashram. From that day on he was preoccupied solely with the masts. Although Baba had been working with them since returning to Meherabad, his work now intensified.Baba indicated that his mast work done during his seclusion “receives a push”.

Baba moved back to Dadi Kerawala’s bungalow at Ganeshkhind Gardens . The result was that, thereafter, the Maharani reserved Guruprasad exclusively for Meher Baba’s use, and never allowed anyone else to stay while Baba was there.