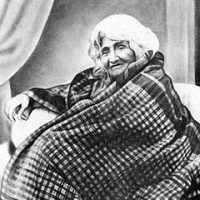 Babajan visits Meherabad. For the entire day Baba does not wear sandals. Baba calls it, “The most eventful and significant day of my life!”

Jal Kerawalla received a telegram on 1 April 1939, informing him that his elder brother had died of a heart attack. He took the news with an equable attitude, which Baba appreciated. “It’s all illusion and not worth a serious thought,” Baba told him. Later, Baba praised Jal’s work for him in Jabalpur to Chanji, “Jal is very sincere with an excellent heart quality, which makes him very dear to me. He may realize and see me in my true form in this life.”

Baba and the mandali left Mahabaleshwar by car on the morning of Tuesday, 1 April 1947. They went to Poona, where they boarded the Madras Express train at 5:30 P.M. With Baba were Gulmai and fifteen men: Adi Sr., Baidul, Don, Eruch, Ghani, Gustadji, Jalbhai, Kaka Baria, Khak Saheb, Meherjee Karkaria, Nariman Dadachanji, Pappa, Pendu, Ramjoo and Sidhu. Bal Natu joined them at Kurduwadi; Gadekar and Limkar boarded the train at Sholapur.

On 1 April 1949, Adi Sr., Nariman, Meherjee and the boy Frenchy arrived in Mount Abu. It was common practice for Baba, before proceeding on a mast tour, to gather reports of various masts and saints and their habits and locations, to facilitate his work when he went to contact them for the first time.