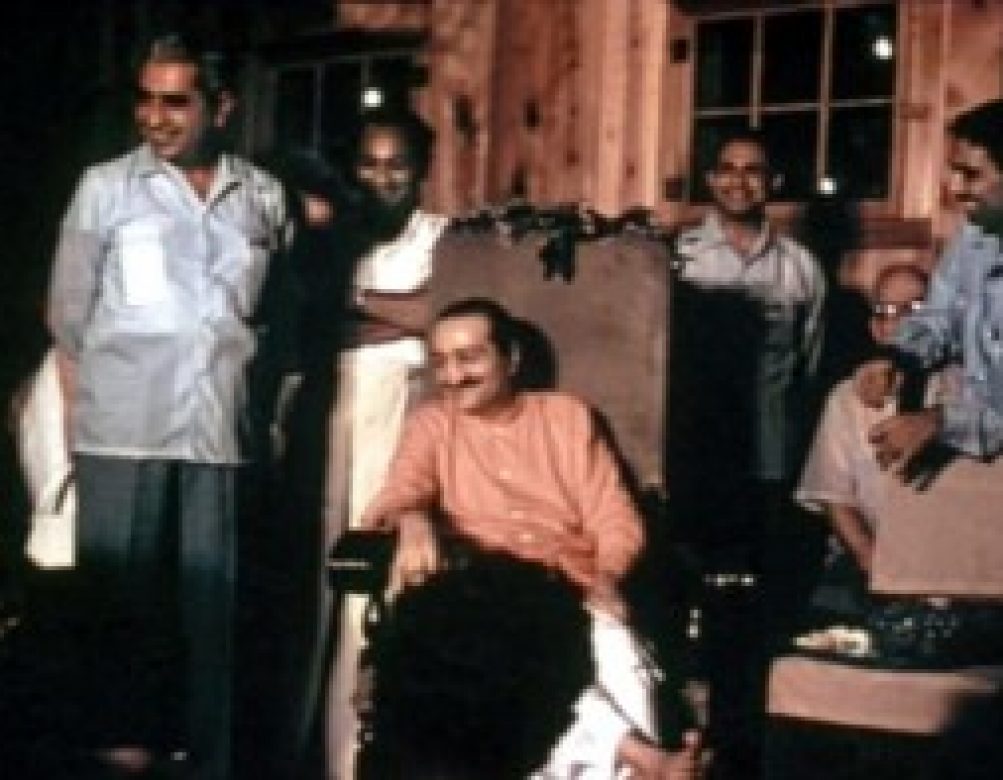 Accordingly, on Wednesday, 17 September 1947, Baba drove to Bombay with Sarosh, Kaka Baria, Norina and Elizabeth. There they were met by the other mandali who were to accompany them: Adi Sr., Baidul, Eruch, Kaikobad, Gustadji, Pendu, Padri, Ramjoo, Rusi Pop, Jalbhai, Pappa, Meherjee, Nariman and Sadashiv Patil. All boarded the train at 8:30 that evening and left for Surat.

Ali Akbar (Aloba) was among those who had come to the station. When he saw Baba, he suddenly collapsed on the station platform and began loudly shouting Baba’s name “out of the joy of Meher Baba’s presence.” Baba was not pleased. He leaned out of the train compartment window and gestured to Ali Akbar that he would slap him if he did be quiet and calm down. Ali Akbar stopped shouting, but he could not hold back his tears, and some of the other Baba lovers helped him up.

Before going to Meherabad on Friday, 17 September 1954, Baba stopped at Khushru Quarters where photographs of him on a tiger skin on Adi’s bed were taken by Bhaiya Panday. Afterwards, Baba went to a student hostel near Akbar Press and gave darshan there to the Mohan Press workers, who had worked hard to print Baba’s numerous messages and circulars.

Baba arrived at Meherabad at 9:20 A.M. At Upper Meherabad, he informed the Western group, “On very special occasions, I hold prayer meetings with a few of my most intimate disciples. Today, I shall hold one of these meetings, so that you all may be included.”

On Thursday, 17 September 1959, in the hall, Baba asked Francis to read out the portion of Stay With God about the “OM Point.” Elaborating, Baba said, “It is a secret or mystery which I never explained so vividly in my previous advents. All words have come out of [the Om Point].”

Baba asked Kenmore to answer a few questions with his lips pressed tightly shut, saying yes or no. Baba then explained, “The sound formed is hu-hu orom. At times of extreme pleasure or grief, this sound automatically comes out of your mouth. Whatever sorrow, pain or pleasure it may be, this sound will always be the same.”