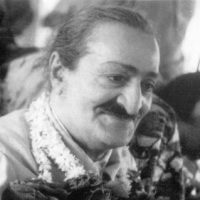 Pendu reserved a train compartment for the group, and on the afternoon of 17 January 1953, Baba and his contingent of about 50 men left Vijayawada for Tadepalligudem. On the train Baba listened to his lovers tell stories and jokes and inquired often about the speed at which the train was running. Jalbhai and Dhake amused him with funny tales; Kumar narrated fantastic “true” episodes of his life. The train passed Eluru, where they saw Ranga Rao supervising the construction of a large pavilion.

They waved to him and he waved back.

They reached Tadepalligudem at 7:30 that evening. On the station platform, hundreds were waiting for Baba. Witnessing this sight on earth, tears fell from the angels’ eyes, and forming into rain clouds, they began drizzling down from the sky.

Members of the Meher Reception Committee came forward to greet Baba. When Baba stepped off of the train, Dr. Dhanapathy Rao garlanded him profusely, as did the others. Because of the unseasonal rain, they were confined to the station for about five minutes. All during this time, loud and vociferous acclamations rent the air, welcoming the Ancient One to Tadepalligudem.

In a car bedecked with thousands of flowers, Baba took his seat with Nariman, Meherjee, Eruch and Dhanapathy Rao. Everyone else boarded either cars or buses, which lined up behind Baba’s car, forming a long procession. They were led out of the train station by a marching band as the crowd sang this sweet tune: “Namo Meher Baba, Avatar, Namo Dev Deva [Almighty Meher Baba, Avatar, God of all Gods].”