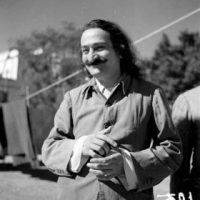 On Sunday, 15 January Baba traveled into the interior of Ceylon and stayed in a bungalow called Villa Valencia on a hill between the towns of Bandarawela and Diyatalawa, an area said to have the most equable climate in Ceylon. It was picturesque and a river of raging torrents ran through the deep ravine behind Baba’s bungalow, causing a ceaseless roar.

On 15 January, Baba left Meherabad by car with Baidul and Kaka to contact Chatti Baba and other masts in South India. He proceeded first to Hubli, where he recontacted two masts. One of these was the young saint called Dev Purush. A very advanced mast of the sixth plane, he sat completely naked on a stone.

Baba left Bangalore at 7:30 A.M. on Monday, 15 January 1940 on a short visit to Hassan. He rode in Elizabeth’s car with Mehera, Mani and Khorshed; Jalbhai drove an Auburn with a few of the Westerners; and the rest of the women’s group, along with Kaka and Eruch, went in the Blue Bus, which Don drove. Baba and the women arrived at 12:30 P.M. and stayed in a dak bungalow. Gustadji and Pappa Jessawala had gone a day earlier to make separate arrangements for the men and women.