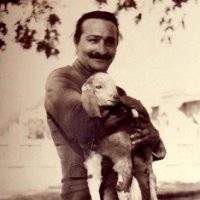 Baba arrives in Zurich, Switzerland and stays with Hedi and Walter Mertens.

On Baba’s agreeing, Pataskar, his wife and Amar Singh arrived at Meherazad on Sunday, 15 December 1963 at 9:30 A.M. The road was lined with police as their car sped through the gates of Meherazad. Although Pataskar held an important and influential government post, he was a sincere and unaffected person, and was visibly moved when Baba embraced him. His wife was severely afflicted with arthritis, and when she was carried into the hall on a chair and seated before Baba, she cried out, “Closer, closer, put me closer to Baba!” She talked to Baba with such confidence and candor, as if she felt certain of his love and understanding. It was a most touching scene.

Their daughter had leprosy and Mrs. Pataskar begged Baba to cure her. Baba instructed that the girl should fill a glass with water every morning, look at it and repeat Baba’s name before drinking it. “My nazar will be on her,” Baba assured the woman, “and on you too.”