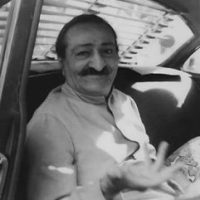 At the threshold of Upasni Maharaj’s hut a dais had been erected, on which he was requested to sit. Maharaj refused to do so, exclaiming, “Oh, no! I am not the type to sit on silken cushions!”. Baba and Khansaheb, however, persuaded him to do so. Then, with much resistance, his gunny sack was removed and he was dressed in new clothes. A pink turban was placed on his head, a white dhoti was wrapped around his waist, and Baba then persuaded Maharaj to put new sandals on his usually bare feet. Sandalwood paste and vermilion were applied to his forehead, and Maharaj was garlanded profusely. Afterward his puja and arti were performed by his Hindu devotees with all the Zoroastrians participating. Gulmai was instructed by Baba to wave the arti tray in front of Maharaj; this was followed by devotional music and bhajans. Afterward, a large photograph of Maharaj was displayed in a palanquin and taken through Sakori village in a grand procession accompanied by bhajan-singing and a band.

Baba and the women mandali, proceeded to Bhilar near Panchgani in Meherjee and Nariman’s cars, and after a three-day holiday there, they returned to Mahabaleshwa