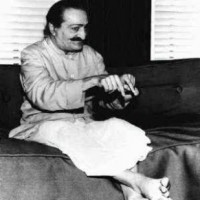 This is a story about the knowledge and power of the Qutub. There was once a Muslim Perfect Master named Piran-e-Pir Dastagir in Baghdad. He was a Qutub and loved a boy very much. The boy loved his father very much. At the age of seven years, the boy’s father died and the boy joined the Qutub.

One day, twelve years later, the Qutub Dastagir was in an exceptionally pleasant mood and told the boy that he would grant whatever he desired. The foolish boy, instead of asking for God-realization, requested his father be risen back from the dead.

Dastagir repeated the same question three times, but the foolish boy asked only for his father. The Qutub granted his wish, and the boy found his father alive and lovingly embraced him.

Now see the power and knowledge of the Qutub. In order to make the boy’s father alive, who died twelve years before, he had to make innumerable alterations in an instant, because his father must have been connected with so many relatives and friends, who in turn were connected with many others. In short, to make a seemingly small alteration, the Perfect Master has to make innumerable alterations in the universe.