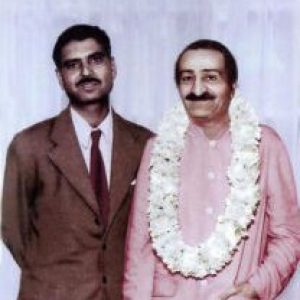 On 13 November, Baba went up Meherabad Hill at 9:15 P.M. to begin his third stay in the tank room. A notice was posted on the board informing the community that he would be on the hill for the next four to five days and would be leaving for Bombay on 28 November. Chanji was sent to Bombay to make the necessary arrangements and to see his family.

On 13 November, Baba explained, “God is neither good nor bad, and everyone, being of and in God, cannot be good or bad. Good and bad are the display of a dual existence which does not exist and is therefore called illusory phenomenon.”

Baba returned to Meherabad at 7:30 A.M. on Sunday, 13 November 1955 and, after discussing matters with the mandali in his cabin for half an hour, he came to the hall where the Telugu group was present. As he entered, some from the gathering garlanded him. Baba remarked, “I know you are garlanding me with love. But the first day, when almost all of you did it, that was quite enough. I only have two coats and I like this pink one I have been wearing. Now this daily garlanding has spoiled it, and I will have to give it for washing after wearing it for only one day.”

On Wednesday, 13 November 1968, Baba declared to the mandali:

The days of my manifestation are nearing fast and only to Mehera have I mentioned the time of breaking my silence. My manifestation period will last for fourteen years before I drop the body.   Therefore, this Avataric manifestation will be the greatest.