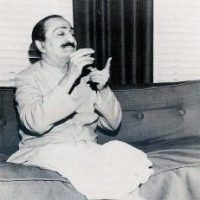 Meher Baba composes his own arti, “Bujaave Naar ” which later becomes known as the Gujarati Arti.

Almost as soon as Francis Brabazon learnt of Baba’s plans to have a sahavas in Australia, he set about locating a place that would be suitable to hold it. He drove far and wide — to the Blue Mountains west of Sydney and up into the New England Highlands near Armidale, as he felt a city was not the best place for a center. Then, on 11 January 1958, Mani sent the following letter to the Australians:

As in the USA, Baba will give his sahavas in Australia at one place only. Baba leaves the sahavas arranging to Francis, with loving and willing co-operation and help from all as possible. Baba has outlined the main points, and leaves the details to you. For the site of the sahavas: Baba gives first preference to Queensland, and second preference to Beacon Hill. Baba would like Queensland if the climate is good during June, and if the place is practical from all angles — finance, convenience, climate, accommodation for all, etc. But you should not feel bound by this. If Queensland is not found to be practical from the above mentioned points then you should drop the idea and make arrangements at Beacon Hill for all concerned. If Queensland is found practical, then it would be ideal — for Baba would be blessing with his presence yet another part of Australia. Baba wishes Francis to let him know which is decided …

Baba’s longtime and close disciple, Ramjoo Abdulla, expired of heart failure in Satara on the afternoon of Wednesday, 11 January 1967, at the age of 67. His friend Dr. Jog sent this telegram to Baba: “Ramjoo has permanently left us and come to you this afternoon.”

Adi forwarded the telegram to Meherazad the following morning, and Baba cabled in reply: “My very dear Ramjoo has come to me to rest eternally in me. Inform his family to have courage and give them all my love.”