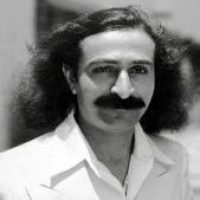 While in England, Baba goes to the studio of a sculptor, Edward Merrett, and sits for him for an hour. This is the first time that Baba permits a sculptor to depict him. A plaster mold of Baba’s right hand is also made.

Sunday, 11 April 1948, Baba went to the village of Tilot, where he contacted Vishnu Datt Digambar, an elderly mast in his eighties, but he also appeared untouched by time. Among all the contacts in Uttar Kashi, he was the best, and Baba remarked about him, “He is three things in one — a mast, a saint and a child.” This very high mast was completely naked and had been silent for many years. Vishnu Datt Digambar used to beg for his food at five particular houses, reminiscent of Sai Baba, who also begged at five houses. When Baba left, the mast bid farewell to Baba with kisses.

On Saturday, 11 April 1959, Baba visited the Poona School and Home for the Blind in Koregaon Park. He had been invited by the school’s superintendent, Mr. Kale. Baba arrived there at 9:00 A.M. There were about 150 blind students and a dozen teachers, also blind. The boys sang before Baba, and one of them sang a welcome bhajan composed by Madhusudan and taught to him by Subhadra, expressing their appreciation to the Avatar of the Age for sanctifying their institution with his presence.

Baba then gave each of the students and teachers a touch of his Reality by embracing them.