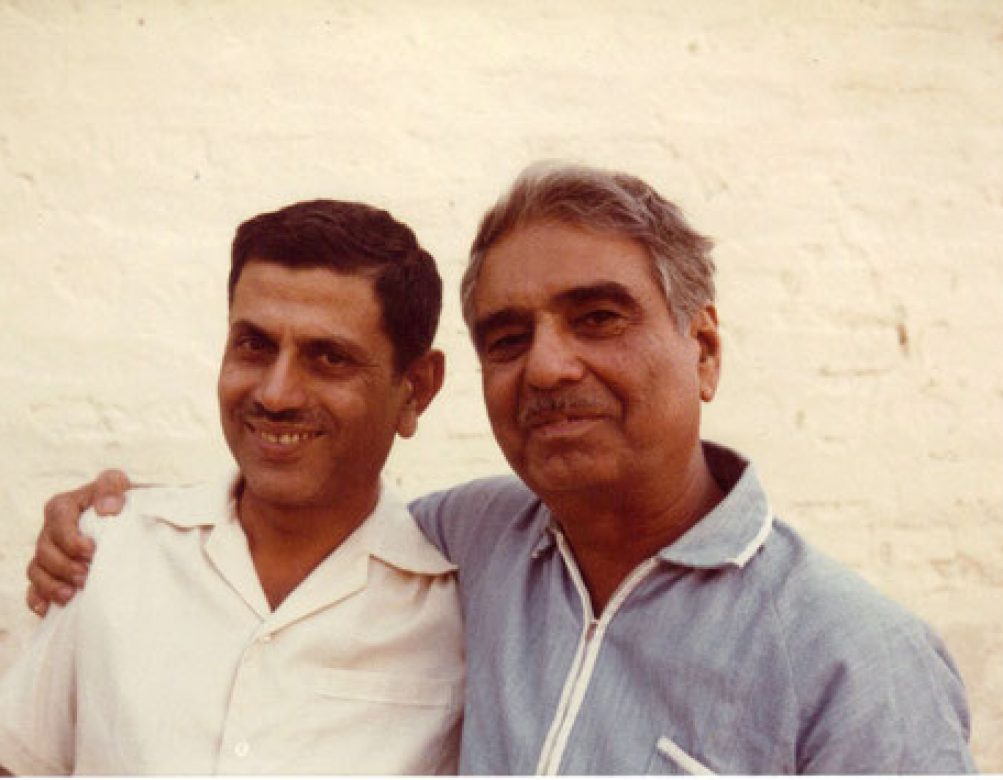 Remembering the brothers  Eruch and Meherwan  Byramshaw Jessawala, here is an anecdote.

Background: These are the early days after Eruch Jessawala dropped his body. Meherwan Jessawala recalling his elder brother Eruch narrates a story. The story dates back to the mid-40s, during a period when Eruch was staying with his family in Bindra House in Pune and would frequently be called by Meher Baba to be with him at Meherazad.

Meherwan narrates:
On one of these visits, a wealthy man came to have Meher Baba’s darshan. Before leaving, while bowing down to Meher Baba, the man placed a packet at Meher Baba’s feet. “What is it?” Baba asked. “A small token of love offering,” the man replied. “There is no need for it,” Meher Baba gestured, and asked him to take it away.

Over the years I often noticed that, whenever Meher Baba gave Eruch an assignment, Eruch would always be most anxious to execute that work, lest he might die with the work unfinished! Now in this case, the packet of money and the charge Meher Baba had given to him weighed heavily on him. So when he returned to Pune, he would pay visits to pan and beetle leaf shops, sugarcane juice stalls, and other wayside centres of gossip and small talk, trying to catch word of some needy person matching Meher Baba’s description.

One day, while passing by a vendor of sugarcane juice, Eruch happened to hear a customer say, “I really pity that honest and truthful man: formerly he was in such happy circumstances, until he was accused by his corrupt seniors under some fabricated charge. He has been completely ruined and now lives in penury. What a plight the poor fellow is in!”

Eruch approached the speaker and asked, “Who are you talking about?” “What is that to you?” the man fired back, looking at him suspiciously. “My elder brother likes to give help to people who are in dire straits,” Eruch replied. “I think he would be interested in the man you are speaking of.”

Eruch got all the information and immediately set off by bus for the village of Bhor, some 40 miles to the south-west of Pune on the Pune-Satara highway. The road to Bhor branched off the main road and led across a large dam, the famous Bhatgur Dam, at that time the largest masonry dam in the world. Reaching the village beyond, Eruch inquired, and was duly led to a small ramshackle hovel on a run-down, filthy by-lane. “This is the place,” he was told.

He knocked on the door. A woman opened it. She was very beautiful, but wore a haggard look on her face, and was dressed in rags. “Where is the man of the house?” Eruch asked her. “He has gone out,” she answered, looking very alarmed. “Why do you want him? My husband has done no wrong!” For Eruch in his khaki clothes seemed like some official who had come to harass her or her husband in some way. What else would induce a stranger to visit such a remote outpost?

Eruch tried to pacify her and said that he had come to offer some help to her husband. At that she said, “No, no, please go away, as we will never be able to repay any loan.” Eruch reassured her on this point and was able to win her confidence. Then she explained to him that her husband was out at work. In fact, he was a tollgate attendant on the very road over the dam that Eruch had crossed on the way to the village. “He will be coming back home this evening,” she said. “Very well,” Eruch answered, “I’ll return tomorrow, bringing help, as I’ve assured you. Will your husband be here then? Ask him not to go before I come and see him.”

She promised him that he would be there, and Eruch departed for Pune. At Bindra House that night, he asked me, “Would you like to come with me on a picnic tomorrow at the site of the world’s largest dam?” Still just a boy at the time, this idea was appealing to me, and this is where I came into and became a witness to the rest of the story.
That next morning, packed lunch in hand, the two of us caught an early bus to Bhor. When we reached the hut, we found the man waiting for us. “What can I do for you?” he asked.

“My elder brother sent me,” Eruch told him. “He wishes to give you some help in your predicament.”

“There is no question of repayment. This is a gift of love from my elder brother. Please accept it, and he will be obliged to you.
“But there is a condition,” Eruch went on. “I have to wash your feet and bow down to you. Please allow me to do this, so that I may give you this gift.”

Very reluctantly the man agreed. Eruch washed his feet, bowed down before him, and gave him the packet which contained quite a substantial sum.

The man was rendered stunned and speechless by this whole turn of events. Immediately Eruch turned to me and said, “The work is done. Let’s go now.”

But before we had gone more than a few steps back down the road, the man came running after us. “Who are you?” he said. “Who has given me this gift?”

“It is from my elder brother,” Eruch answered. “It is an expression of love for you and your family. Don’t ask any more about it.”

“But did you know,” the man went on, “that if you had sought for me tomorrow you would not have found me here? And do you know why not? Do you know what I was planning to do?”

“This very day I was planning to kill myself, to commit suicide by jumping over the dam wall. I had reached such desperate straits, such a dead end in my life, that there seemed to be no other way out for me. It is thanks to you that I am living on past this day.”

With this, Eruch and I left quickly and hurried back along the road to the dam. There, as Eruch had promised, I got to enjoy a pleasant picnic and outing; and that evening we caught the bus back to Pune.

The beauty of this story is that it shows not only Meher Baba’s unfathomable compassion for who but God could have arranged in such an indirect and understated way to bring a gift like this in the very nick of time into the hands of a man who so desperately needed it, but at the same time it depicts Eruch’s extraordinary obedience and intuitive responsiveness to his wish and will. What an unobstructed channel he was for the flow of Meher Baba’s divine life! Indeed, as Meher Baba himself said, Eruch was “matchless.” But all this was the effect of Meher Baba’s work with him. As Meherwan so beautifully said at the beginning of his story, “what would most please Eruch would be if, when we commemorate him, what we remember is the painstaking years of effort that Baba spent in training Eruch, so as to bring him up to the standard of what we see today.

(adapted from the source: http://www.belovedarchives.org/index.php?option=com_content&view=article&id=88&catid=39)