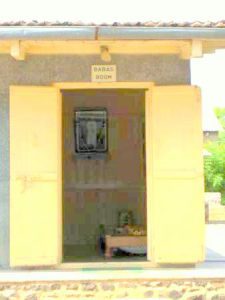 “The ambulance had died of a broken heart.”

While relating the story of the stretcher, Mani told us that after Baba dropped His body, even inanimate objects responded. One such instance concerned the ambulance belonging to Booth Hospital at Ahmednagar in which Beloved Baba’s body was borne from Meherazad to Meherabad on the evening of 31st January 1969, reaching Meherabad as the sun was setting and the full moon was rising.

While the Tomb crypt was being prepared to receive the beautiful form of the Beloved, Mehera and a few other women from Meherazad sat in the Cabin around the stretcher on which He rested — it was their last private time alone with Baba.

After the interment, the thought of parting with the stretcher was painful. Dr. Donkin explained this to the administrators of Booth Hospital, and offered to replace it with a new one which he would arrange to get from his father in England.

The reply was: “What is the use of the stretcher when the ambulance itself is no longer functioning!” They went on to explain that as soon as the ambulance returned from Meherabad and drove into the hospital compound, the engine stopped dead and could not be made to start again. Eventually, three years later, the whole ambulance had to be scrapped and replaced by a new one as the mystified mechanics could not find the cause of the vehicle’s failure!

Mani said, “What other explanation can there be but that having served its ultimate purpose of bearing the Avatar’s form to Meherabad, the ambulance had died of a broken heart.”